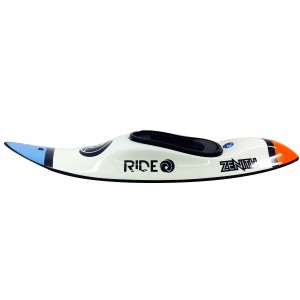 Designer James Hawker again mixes it up, this time mating his favourite surf ski and surf kayak to create a design that really has got zenith like capability. With the widest point of the hull forward of the cockpit and V through the stern with single to double concave, the Zenith carries wild speed once planing and is surprisingly quick to paddle out. But get your weight over the rail and pull into a carve and the crispest sharpest turns are yours to enjoy – anywhere on the face. Hit the lip and the speed and hull width mean it really flies but again that mix means that it also lands balanced and ready for the next move. The future is in this Ride.

-Have and special requirements? We will do our best to accommodate you