Twenty years ago I had just finished my first year at university, given up slalom and switched to paddling freestyle.

Aged just twenty I had already spent most of my teenage years competing in paddlesport and armed with the attitude, physicality and ambition that people of that age find easier, I’d made the GB rodeo team and went OFF to Germany for my first worlds.

I got a silver medal and was over the bloody moon.

Twenty years later, I’m forty and having paddled for about thirty years, I have also made it my career. Having been lucky enough to win two world titles in freestyle and after years of scoffing at goat boaters I’ve taken up surf kayaking and love it. 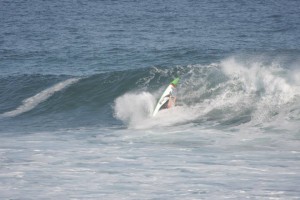 Nowadays my attitude is one of liking food and beer. This in physical terms means you have to RUN LIKE SHIT just to keep sight of your old boy when you look down. But aside from that change I have definitely still got ambition and like to compete, so I made it to the Welsh team and my first surf kayak worlds in Spain.

Despite training as hard as I could, running, biking and surfing the on-shore slop that counted for waves back home, I didn’t have a great start. Almost breaking my ribs just before we departed left me sore. I had boat conundrums (lucky for me I know), and I got frustrated at the site, with crowds on the peak and my own surfing. 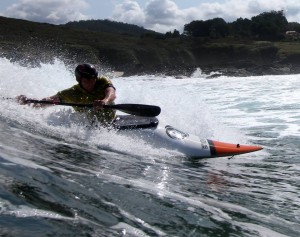 Just twenty four hours before IT all kicked off I was pretty sketched out and needed to get my shit together.

I started by pulling into routine. I’d get up, S,S & S and eat a solid breakfast – just like a work day. On site I’d try and keep things vague, moving around and having a laugh with folk, plus keeping occupied with RideTV. Most of all I’d just watch the water, listen to music and focus on what I’d do next paddle.

This technique is something I learned when I went to the Ottowa Freestyle worlds. It’s sometimes called the Zone and IT’S not easy to do, but IT’S a way to visualise. It doesn’t really matter who you are competing against, or where, you’ve already pictured winning and so YOU’RE just RECREATING that without thinking about it. Left vs right side of the brain kind of stuff.

So I dug into my routine and focused and paddled well and I got to the finals. Amazeballs! I could be a tosser right now and claim that it was easy, but that would be rubbish. I would just paddle out with a rock solid belief of winning and whilst it didn’t always work ( like getting disqualified in the IC), as the comp went on it really played out. 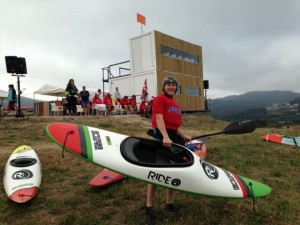 That and being a full on hustler.

I’ll just deal with the elephant in the room. Short boat or short long boat. Slash turns or flowing surfing. There was some strong feeling about this at the event. I’ll lay my cards down right now and say I don’t care. If I just want to free surf I’ll go on holiday to Morroco or somewhere. If you go to a worlds you should want to compete and compete to win. If that means choosing particular way or means I’ll take it. If it requires moving around others and pushing them out, I’ll do that. If it means working to the judging and even attempting to influence it in the way you paddle, so be it.

I’d used all my experience to get myself to THE finals and honestly thought I could win. Not because I was surfing at my best, I wasn’t. Not because of my long/ short boat, it helped, but the Zenith getting third disproved that. No I just relied on my mental belief.

And you KNOW what, when it came to the crux, the twenty minutes it all came down to……..It didn’t work. 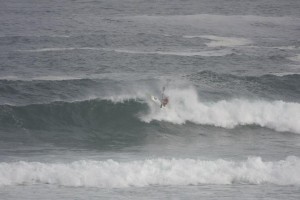 Very simply THERE was someone else. Someone who’d probably done pretty much the same to prepare as me, but when it came down to it they just did it that bit better.

My Ride team mate Edu won the worlds and you could see all the way through the event he wanted it. Really wanted it. More THAN the rest of us perhaps, and I honestly believe he deserved it more than anyone else in the field. A toast to you sir, a true victor and an honour TO WITNESS first hand YOUR skill and composure. 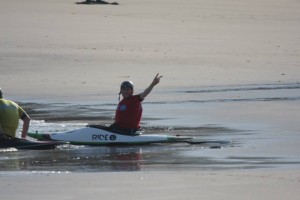 So I finished the worlds number one LOSER. But TWENTY years after getting my first world championship silver medal I went and got another….. And I’m over the bloody moon. Again!